On June 3, 2017 I had an accident that had profound effects on my lifestyle. This blog recounts my road to recovery.
My weekly surgeon visits had been going well. The incisions healed well, without infection. The swelling in the ankle continued to subside. I felt increased strength developing in the ankle. I still was not allowed to put any weight or pressure on the ankle for 3 months which meant perhaps by early Sept I would start rehab and getting back on my feet.
I had my regular orthopedic surgeon appointment July 27 to review the results of my most recent CT scan. These consultations were usually about 30 mins. We had made plans to head down to our trailer in Marysville for a 10 day vacation with our daughter, son-in-law and grandson who were visiting from Australia right after the appointment.
This appointment was different.. It took an hour. It took so long as Dr. Lewington was delivering news I was neither expecting, nor was I prepared for. As I said previously, Dr. Lewington’s beside manner is exceptional and he is very thorough. This meeting was no different. He knew the significance of what was being discussed. In all my x-rays there was a ‘black’ spot where the Tibia and Talus met. It had been puzzling to Dr. Lewington. The CT scan had confirmed his worst fears. I would need further surgery! This was devastating.
Just as I thought the end was in sight and there was hope that I could start putting weight on my right ankle and rehab to start walking again, my recovery time table was being set back. Not by a little, but a lot. Dr. Lewington was recommending Ankle Fusion surgery. Because of the severity of the damage to the Talus (essentially part of the Talus had shattered/disintegrated beyond repair) the Fibula and Tibia could not anchor/settle properly. Ankle fusion surgery was always a possibility, but not until later in life when arthritis pain would become too unbearable.
I wasn’t concerned about the ankle fusion surgery as I had known some people who had had it and it wasn’t an uncommon surgery. I was devastated that this now meant my recovery was going to be set back another 4 months! Just as there seemed to be a light at the end of the tunnel.. There was – just happened to be another train.. An extra 4 months of pain, of no independence! It was one thing for me to have limited movement during the summer when there’s lots of daylight and I could enjoy the outdoors and deck. It’s another to endure it during the drab, dreary, wet months that start to consume Vancouver in the Fall and winter…
Surgery was scheduled for Sept 27, followed by another 3 months of no weight and then rehab. I would not be walking before the New Years of 2018… I felt I was right back to day 1. The last 2 months had been for nothing. It was devastating. The 2 month wait for surgery was a killer. Spinning my wheels going in circles, absolutely no where fast. If I thought I didn’t have purpose before, I had just been set adrift..
What doesn’t kill you will make you stronger.
I guess I didn’t realize just how much this set back had also set my personality and frame of mind back as well. We went straight from the Doctors office down to our trailer to meet up with our grandson and children. Nothing brings a smile to our face like our 8 month old grandson. 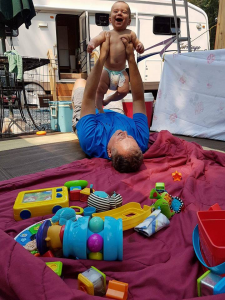 I guess I didn’t realize that I had become unbearable to be around. Continually pointing out things that were trivial and insignificant to those around me. The pity party was on. It wasn’t until my wife mentioned it to me that it had also been brought up with our children. I just wasn’t nice to be around. Easy for others to say – they don’t understand the constant pain (not unbearable, just uncomfortable and constant) I’m in and the frustration of being a burden to everyone.
Keep it up Greg and you won’t have anyone around you to help you.. I had let my circumstances get the better of me. They were defining me. That’s not me. I had always risen and overcome challenges in the past. I had better smarten up and smarten up quick or the next 6 months would be the longest 6 months of my life.
It was then that I decided I wouldn’t let my injury define me. That I would learn from my disability. After all there are many many many others around with significantly greater challenges. Mine are only temporary. Yes, there will be long term changes to my lifestyle, activities, etc, but I will walk again and life will go on. In the overall scheme of life this 7 month set back and following rehab is a relatively small timeframe. Don’t make it longer than it is.
Don’t let the adversity define you. How you respond to the adversity will define you. Developing new perspectives is a good skill. Developing patience is a good skill. Become more aware of your surroundings and those around you is a good skill. Be more sensitive to those around you is a good skill. Turn a negative into a positive is a good skill. Take advantage of this opportunity Greg. You may never get the chance again.
Funny thing. Once I began to be more aware of my surroundings and those around me, the easier it became to deal with the set back. The easier it got to get out of bed. The less pain I felt. I began focusing in the positive and all the good around me. It doesn’t make the time go any faster, but it certainly makes the time much more valuable.
I still have a lot to learn. I said during this period of reduced physical abilities that I wanted to focus on blogging, to learn the guitar (picked up a cheap used guitar at a garage/yard sale) and to read more. I hadn’t done a lot of any. I’ve now scheduled guitar lessons. This is the start of my blogging and I’ve picked up a few books and am working my way through them.